Prophetic Masterpiece
(The Book of Revelation)

On the night before He died on the cross, Jesus spoke to His disciples and told them that He had many things that He wanted to say to them, but they were not yet ready for this important information (John 16:12). Then in John 16:13 Jesus gave a promise: "when He, the Spirit of truth is come, He will guide you into all truth: for He shall not speak of Himself; but whatsoever He shall hear, that shall He speak: and He will show you T______________ T_____ C_________."

The book of Revelation is about things to come (future things). Sometimes you will hear people say, "What is this world coming to?" or "What is going to take place in the future?" The last book in the Bible helps to answer these questions!

In the previous chapter we learned that during the last years of his life John served the Lord in the city of Ephesus. Was John still in Ephesus when he wrote the book of Revelation (see Revelation 1:9)? ______ John was on the small island of P_______________ which is located in the Aegean Sea, not too far from Ephesus. Because of persecution John had been exiled to this island.  The reason he was sent there was not because he was some wicked criminal, but because he preached God's Word and was an excellent witness for Christ ("for the Word of God and for the testimony of Jesus Christ"--Revelation 1:9). Those who love the Bible and who love the Christ of the Bible are sometimes called upon to suffer for their faith.

The book of Revelation was written at the end of the first century, probably around 95 A.D., during the reign of Emperor Domitian who fiercely persecuted believers. This is the last book of the Bible to have been written. As John wrote down the final verses of this book (see Revelation 22:18-21), it was as if God were putting His final "period" at the end. A period means that a sentence has come to an end. A final period means that there are no more sentences! When John put down the final "AMEN" (Revelation 22:21) the Bible was completed! All 66 books had now been finished!

Today we have something that Abraham, Moses, David, Daniel, John the Baptist, Peter and Paul never had! We have a completed Bible! We must never add to or subtract from God's Word (Revelation 22:18-19)! Our job is to read it, understand it, believe it, obey it and live it!

Very often when a great work of art is first put on display (a famous painting or sculpture) it is first covered up.  Then, there is the unveiling ceremony when the work of art is revealed and seen for the first time.

A Book For Slaves!

The first verse of this book (1:1) tells us that God wants to show this revelation unto His servants. This word "servants" actually means "slaves." This book is for slaves, and only they can really understand the book of Revelation. Are you a slave of Jesus Christ (see Jude 1:1)? Does He own you (1 Corinthians 6:19-20)? What a wonderful slavery it is to belong to such a Master and Lord!

A race is not consummated until the runner crosses the finish line. Only then can the runner say, "I've completed the race!" Without the book of Revelation, the Bible would be very incomplete, like a story without an ending. It is the great concluding and finishing book of the Bible. That which is begun in Genesis is finished in Revelation. Genesis tells us how everything began; Revelation tells us how everything will end. The following chart brings this out:

Satan, who appears as a serpent in the first book of the Bible (Genesis 3), is a central character in the affairs of men.  In the last book of the Bible his final destiny is unfolded.  The downward falls of Satan are described in the book of Revelation:

Why has God taken the time to tell us about things to come? Why has He revealed to us things about the future? Is the book of Revelation given merely to satisfy man's curiosity about what lies ahead?

God gives us information about the future so that we might know how to live in the present! A right and correct understanding of prophecy should help us to live today!

The book of Revelation describes a time of persecution far greater than any of the Roman persecutions. If God can help believers who are living during the great time of tribulation, then He is the same God who could help the early Christians! The book of Revelation shows that even though things will get very difficult on this earth, in the end there is victory for those who belong to Christ! No matter how things look, God is in control, and those who are on God's side cannot lose! God is never a loser, and neither are those who put their trust in Him!

The Bible often explains itself!

Our world has rejected God, rejected Christ, rejected the Bible and rejected truth.  Because of this, our world is headed for judgment.  The Lord Jesus spoke of a future day of trouble which would be the most difficult period in all of human history:  "For then shall be great _______________________ (trouble), such as was not since the beginning of the world to this time, no, nor ever shall be."   One of the reasons this will be such a difficult time on earth is because men will face plagues and judgments sent from God.

In the book of Exodus we learn about ten plagues or judgments that fell upon the land of Egypt.  In the first plague, all the waters (including the waters of the Nile River) were turned to __________________ (Exodus 7:20).  The second plague involved an invasion of frogs as described in Exodus chapter 8: 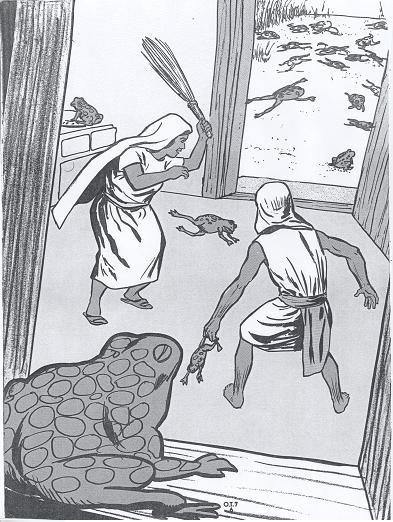 This plague of frogs happened exactly as the Bible describes it.   The Egyptians were plagued by frogs in enormous numbers, to the point where these amphibians were found in their bedrooms, in their ovens, etc.  Why do we believe this?   Because the text of the Bible says so!  The text of Scripture is very clear about this plague and we take these statements literally.  This plague really happened, just as described in the book of Exodus.

There were eight other plagues that happened in Egypt as described in Exodus 8-10.  The last Egyptian plague was the killing of every firstborn son, including Pharaoh's son (Exodus 12:29-30).  This final plague convinced Pharaoh to let the people of Israel go away from his land.

1.  The Fourth Seal Plague (Revelation 6:8): "And I looked, and behold a pale horse: and his name that sat on him was Death, and Hell followed with him. And power was given unto them over the fourth part of the earth, to kill with sword, and with hunger, and with death, and with the beasts of the earth."   This passage indicates that one-fourth of the world's population will die.

2.  The Sixth Trumpet Plague (Revelation: 9:18):  "By these three was the third part of men killed, by the fire, and by the smoke, and by the brimstone, which issued out of their mouths."  See also verse 15.  This passage indicates that one-third of the world's population will die.

The implications from the Fourth Seal Plague and the Sixth Trumpet Plague are astounding when compared together.  If one fourth of the world's population will die, and later one third will die, this means that the original population of the world will be reduced by one half, just by these two plagues alone!

This can be illustrated as follows:

Suppose you have an original population of eight blocks:

Reduce this population by one-fourth and six blocks will remain:

Reduce this population by one-third and four blocks will remain:

Therefore, your final population (four blocks) is only half of what you started with.  The study of just these two terrible plagues helps us to understand why the Lord Jesus described the great tribulation as the most difficult time the earth will ever experience (Matthew 24:21).

There are many people, even those who claim to believe the Bible, who do not believe that the plagues described in the book of Revelation will be literally fulfilled.  For example, preterists [those who believe that most prophecies have already been fulfilled] believe and teach that these plagues have already been fulfilled in or around 70 A.D.  They believe that the great tribulation has already taken place!  Of course, we know that these plagues have not been literally fulfilled in 70 A.D. or at any other time in past history.  We know that there has never been a time when one-third of the sea became blood, one-third of the sea creatures died and one-third of the ships were destroyed.  Since this has never happened, and since God cannot lie, then there must be a future fulfillment.  Dispensationalists [those who seek to consistently interpret the Bible literally, to understand Scripture in its normal sense] believe that these judgments will take place in the coming tribulation period, a time which Jesus said will be the greatest time of trouble the world has ever known (Matt. 24:21).

Why is it that non-dispensationalists understand the plagues of Egypt literally, as having happened exactly as described, and yet they deny that the plagues described in Revelation will ever be fulfilled literally?  Their position is very inconsistent.

God's Outline of the Book

God has given us His own outline for the book of Revelation. It is found in Revelation 1:19 and it is made up of three parts:

JOHN WAS TO WRITE DOWN THREE THINGS:

The following chart will help you to see at a glance the contents of the book of Revelation:

The Book of Revelation--A Prophetic Masterpiece

(A clear hard copy of this chart can be obtained from the Middletown Bible Church. Please Contact Us.)

Here are the key events that we can expect in the future:

The numbers above correspond to the numbers below: